The Story of Saturday Night: Buzzin, Sweating and an Army of Women

The night began with an army of women in Wetherspoons Deansgate. Typical Saturday night, I [Jsky] was running late. I pulled up to Livingroom in a taxi pumping out dub step - classy! Who the hell do I think I am! I don't know when it first started happening, but as of late Livingroom Manchester on a Saturday night might as well be a nightclub. It gets so busy, and the DJ plays some proper cool tunes. It's a shame the room temperature doesn't match. There's nothing worse than melting at the start of a night out.

Everyone was hyped up for a really big night. New US Hip-Hop buzz artist Mann was in town performing an exclusive set at Bijou Club. Nights like this always bring out the best of the Manchester Scene so we made our way to the club around midnight.

Models Rhian Sugden and Ally Wood looked every bit sublime, whilst party girl Samii Darnley was an absolute delight from head to toe rocking a beautiful Aqua Couture dress. Living TV's 'The Hunks' star Jamie Spencer and Mens Health cover model Rupert Paddington Gomez also struggled to cope with the heat of the night. Gomez, in particular, stripped off his suit jacket to reveal an incredibly loose flowing navy blue vest top. Hey! Whatever keeps you cool, pulling out shapes without sizzling up like two fried eggs. The beauty of Bijou Club however is the terrace area which was very much needed before I dropped a jean size in sweat. Who needs the Kellogg's Special K Challenge when you're this moist!

A couple of guys said they recognised me from Wireless Festival or somewhere. I was convinced they had me mistaken but after pesting a drunken acapella of my hit 'I Need A Lover' on the terrace, I soon came to realise they had seen me perform at Glasshouse Leeds last year. Who was I to stop them from thinking I had perfomed at the Wireless Festival too. I let them have a photo ;).

Mann took to the stage at around 01:30am and I really got into the swing of the night along with Miss Manchester 2006 (Louise Cliffe), Miss Manchester 2009 (Sara Beverley Jones) and Miss Manchester 2010 (Elicia Davies). Manchester United Reserve player Ezekiel Fryers was every bit the cool dude, and one of Manchester's most notorious model agencies (Boss Models) latest signing Thomas Groom had an extreme air of 'dapper' about him. Fellow Boss Model Nicole Bailey, fresh from her excursion to the Dominican Republic looked sultry and with a healthy sun-kissed glow. Ex-Hollyoaks star and Bijou Club's leading lady Sarah Lawrence rounded up the army of women present for a trip backstage to party with the 'Mann' himself.

I left the club early after Mann's performance to cool down and have a nosey around The Village. I can't wait to see where the next Saturday night takes me! 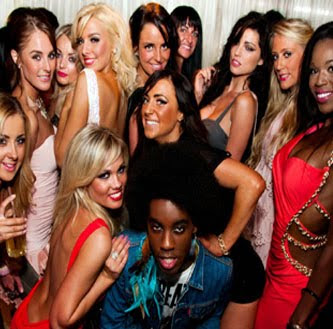 Pictured: Jsky [centre] and an army of women
Posted by Jsky at 21:56