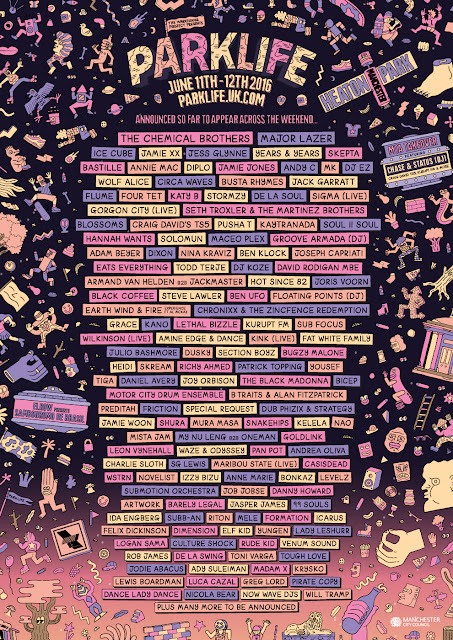 GENERAL TICKETS ON SALE THURSDAY 9AM

HIGHLIGHTS PERFORMING ACROSS THE WEEKEND:


PLUS AN ALL-STAR DJ LINE-UP, INCLUDING...


Parklife Festival are proud to announce names for their 2016 edition set to take place on Saturday 11th and Sunday 12th June at Manchester’s iconicHeaton Park. Celebrating their seventh anniversary with a line-up that showcases the very best in dance, indie, pop and hip-hop, confirmed headliners set to perform across the weekend include The Chemical Brothers, Major Lazer, Ice Cube, Jamie XX, Jess Glynne and Bastille.

UK dance pioneers The Chemical Brothers will take the helm at Saturday’s main stage, whilst founding member of groundbreaking American rap group NWA – Ice Cube – is scheduled following the announcement that he is to release new album ‘Everything’s Corrupt’ in May. Sunday sees Major Lazerconfirmed as headliners along with grime kingpin Skepta, plus an extra-special performance from hip-hop stalwart Busta Rhymes and appearances from UK talents Jess Glynne and Katy B.

Heading up the festival’s array of live music is Brit Award winning four-pieceBastille as well as a range of hotly tipped artists including Wolf Alice, BBC Sound of 2016 winner Jack Garratt, plus Kelela, Mura Masa and SG Lewis. Years & Years will also feature alongside the iconic sounds of Soul II Soul, with legendary disco outfit the Earth, Wind & Fire experience ft Al MckAy set to deliver a masterclass in jazz, funk and R & B.

With an incredible 10,000 early bird tickets already selling out in the short space of two hours and weekend tickets priced at just £89.50, Parklife festival is the UK’s fastest growing festival and will cater to over 140,000 music fans across the two days. Set to return to Heaton Park for their fourth consecutive year – and with a host of after parties in tow which are yet to be announced –Parklife 2016 looks set to be bigger and better than ever.