The Story of Saturday Night: Jsky & Trevor Nelson In The Mix + Ballers Everywhere!

I love my Saturday nights; the pinnacle of any week, and the talking point of the next. I love the trail of possibilities that are opened, people watching and banter in action. The flirting, the jokes and the chance to whack out some shapes on the dancefloor. I love it all.

Last Saturday the wannabe wags of the north descended upon the city centre for Manchester United football player Danny Welbeck's birthday party. Also celebrating that night was UK rapper Chipmunk, who was seeing in his 21st birthday at K2 Nightclub. Bijou Club also had their fair share of footballers partying it up with the likes of Jermaine Pennant, Wes Brown, Danny Simpson and youth Manchester United rising star Ezekiel Fryers to name but a few. TOWIE star Mario Falcone was also in town.

I made my way over to Boutique and arrived a little after 11pm. There was a nice amount of people there to begin with, but once I got settled at our table by the DJ booth this soon amassed to a full club. Trevor Nelson arrived fashionably later into the evening and joined our table, at which point it immediately became an agglomeration of Belvedere and Moet (of which we all dipped into congenially).

Trevor Nelson's DJ set was just getting into full swing when Dayid Haye and Rio Ferdinand made their way over to our table. I can remember singing for Rio Ferdinand years ago at an audition for his record label White Chalk. A lot has happened since then. I'm not the same little boy anymore. 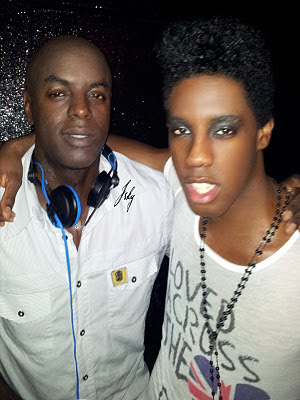