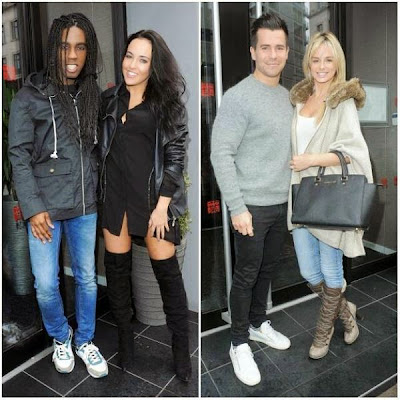 Hats off to fashionista and singer Jsky for having the energy to go back on the town following a big night out on Saturday.
Socialite Jsky went out for Sunday lunch with his pal Stephanie Davis from Hollyoaks, after the pair had partied into the early hours of the morning at Peter Street celeb haunt Club Liv to celebrate Jsky’s 28th birthday and the launch of his new single.
The friends continued the celebrations with a lunch at pan-Asian restaurant Sakana the following day, toasting Jsky’s birthday and the release of song Liv with prosecco and shots of tequila.
Steph, who plays feisty Sinead Roscoe in the Channel Four soap, stepped out for lunch in a black shirt dress and over the knee boots. And Jsky, known for his extensive wardrobe of flamboyant outfits, was almost unrecognisable in a more dressed-down outfit of jeans and trainers with a coat to shield him from the cold and rain.
Over the weekend Jsky unveiled a new long-braided hairstyle and clean-shaven look, a transformation from his signature afro and goatee beard.
On Saturday night he dined at Gusto with celebrity friends Stephanie Davis and Stephanie Waring, who plays Hollyoaks’ Cindy Cunningham, actress Faye McKeever, designer Nadine Merabi and ex Coronation Street star Scott Wright, before heading to Club Liv to perform his song to mark its release at midnight.
He said on the night: “I grew up with R&B music and with this song I wanted to bring the 90s back.”
Jsky narrowly missed seeing One Direction heartthrob Louis Tomlinson at Club Liv. Louis, who is rumoured to be lined up as a new X Factor judge, paid a surprise visit the club with his pals at 2am.
http://www.manchestereveningnews.co.uk/news/showbiz-news/fashionista-singer-jsky-back-out-9032983
Posted by Jsky at 15:57 No comments: 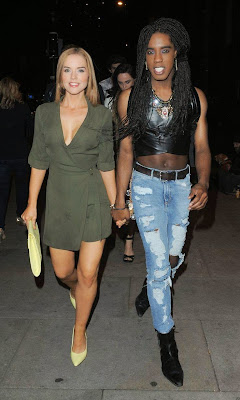 Hollyoaks favourites stepped out in support of their friend Jsky on a special night for the Manchester singer songwriter.
Fashionista Jsky was out on the town to celebrate his 28th birthday while also launching his new single Liv, at the appropriately named Club Liv.
Jsky dined at Gusto with his celebrity friends Stephanie Waring and Stephanie Davis, actress Faye McKeever, designer Nadine Merabi and ex Coronation Street star Scott Wright, before heading to the Peter Street venue to perform Liv to mark its release at midnight.
Stephanie Waring, who plays Hollyoaks' Cindy Cunningham, has been pals with Jsky for five years after being introduced by her co-star Stephanie Davis who plays Sinead Roscoe.
She said: "He did really well. I think the song has got a real Usher vibe to it.
"I hope it is a big success, he deserves it."
Jsky was almost unrecognisable with a new image especially for the occasion. It took a painstaking six hours to transform his signature afro hairstyle into long braids on Friday.
Impressively, he also made his own 'Liv' top which he teamed with H&M jeans and earrings and a necklace from vintage emporium Afflecks.
He said: "It feels surreal. I've done guest vocals for other people but this is my first big solo record.
"I shot the video for it in Manchester and it has a good R&B vibe.
"I grew up with R&B music and with this song I wanted to bring the 90s back."
After belting out Liv with a glamorous blonde dancing duo Jsky narrowly missed the arrival of One Direction heartthrob Louis Tomlinson at Club Liv, who arrived with a group of pals in the early hours of the morning.
http://www.manchestereveningnews.co.uk/whats-on/music-nightlife-news/look-fashionista-jsky-celebrates-28th-9027453